Propagation of solitons in wave basin 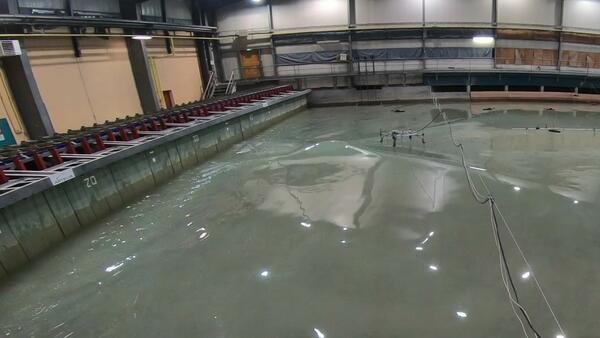 Solitons are fascinating objects, localized waves that propagate over long distances without changing shape. They were observed in the middle of the 19th century by John Scott Russell in a canal in Scotland. Solitons are observed in shallow water in lagoons for example, but also in many physical systems such as magnetized plasmas or optical fibers or to model tsunamis or rogue waves. These objects behave as quasi-particles that collide elastically, i.e. their shape is unchanged by the collision. The SOGOOD project is funded by the French National Research Agency to study soliton gases containing a large number of these objects with random arrangements. It involves physicists of nonlinear waves in fluids (in Grenoble - LEGI, Paris - MSC and Nantes - LHEEA) but also specialists of propagation in optical fibers in Lille (PhLAM).

One of the scientific objectives is to study the propagation of these objects in two dimensions. Very few experimental data are currently available and one goal of the project is to build up experimental databases. ARTELIA's multidirectional wave basin is a unique facility perfectly suited for this study in shallow water. The segmented wavemaker consisting of 60 flaps allowed during a three weeks test series, easy generation of waves with complex structures offering the possibility to explore a large number of configurations and thus significantly advance the understanding of soliton gases. The measurements being relatively easy in this tank contrary to plasmas for example, the collected data will contribute to the progress of other research fields in Physics.