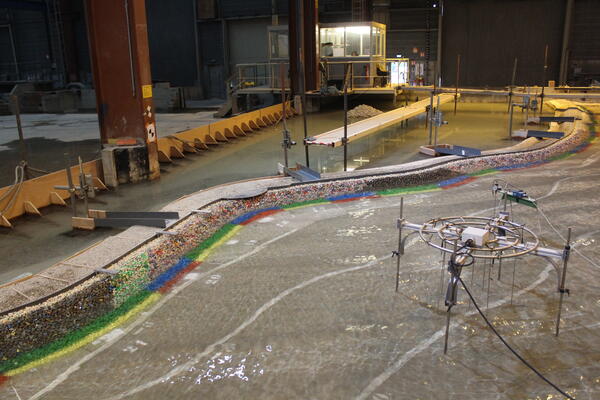 Korbous is a town located in the Cap Bon region of Tunisia, on the eastern coast of the Gulf of Tunis. It is bordered by a coastal road (RR128), which extends from Ain El Atrous to Ain Octor. Since 2001, this road has been closed to traffic due to landslides, dismantling and gradual collapse of the gabion retaining walls.

The road works selected as part of the restoration and securing of the RR128 provide for the development of a maritime protection of the road section between Ain Octor and Korbous in order to fight against erosion caused by the attack of the swells. This sea wall extends over a length of 1.120 km and will be made up of heterogeneous rock armor and ACCROPODE™ I.

Hydraulic stability and wave overtoppings were studied in Artelia's physical modeling laboratory. The tests were conducted over 6 months between August 2021 and January 2022 during which 6 layout alternatives were reproduced and tested on the model. In particular, the tests made it possible to validate a specific toe mound configuration and the installation of ACCROPODE™ I blocks of 2.5, 4.0 and 5.0 m3 in the armor layer.