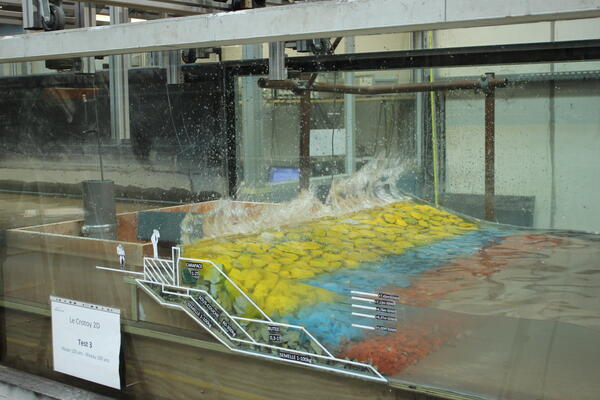 The project consists in the operational implementation of the action program associated with the Somme-Authie South diking system defined in the Bresle-Somme-Authie Flood Prevention Action Program (PAPI BSA) as well as with the diking system of Saint-Valéry-sur-Somme for the Syndicat Mixte Baie de Somme - Grand Littoral Picard. The physical modeling is part of the AVP phase of the action: Structural reinforcement of the Jules Noiret coastal protection on the sea front of Le Crotoy.

Le Crotoy is subject to a significant and recurrent erosion dynamic which attacks the beach on the west side. It is also subject on its southern sector to the dynamics of marine submersion during high tides combined with storm conditions.The Jules Noiret breakwater acts as a seafront, road and dike protection for the houses located below. It is degraded in depth by scouring. The degradation of the structure will eventually lead to the retreat of the coastline, increased exposure to flooding by sea waves and the destruction of public infrastructure such as the road and the promenade.

The objective of the 2D physical model is to verify the stability of the future protection structure of Jules Noiret street and to qualify the overtoppings for different conditions of waves and water levels. The rehabilitation of the western protection involves the installation of a new embankment structure consisting of a rock armour and a crown wall. The characteristic section of the structure tested in a wave flume is modeled at a scale of 1:22.